I have been always an amateur sciencist person, I like a lot Carl Sagan, astronomy, maths and computers. One devices that fascinated me a lot are sundials, I have combined it with my computer knowledge, and this is my contribution to the 2.0 sundial technology. 🙂 This post explain what I have done 🙂

I have designed is about paper sundials, sundials are tools that tells you the time, only with the shadow of the sun, to design a sundial you need to know exactly, where are you going to put it, you need to know the longitude, the latitude and the orientation of the wall with respect to North.
I have designed a web page, integrated with Google Maps, that helps you to find easily all the parameters needed, and finally produce a printable page, with a sundial paper cut, that can be cut and folded and give you a vertical Sundial.
This page allows you to make your own Cut Out Paper Vertical Sundial customized to your place on earth and the declination of the wall you are going to put it. 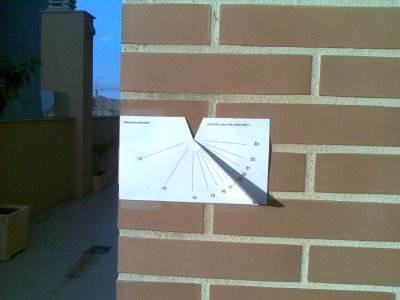 the webpage gives you a printabel PDF, that you only need to cut and fold, this is a sample: 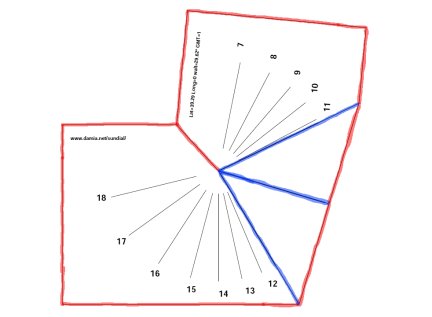 You can enjoy my webpage on: PAPER SUNDIALS

On this post I will explain howto install samba on Voyage Linux 0.5 version. Voyage Linux is the distribution I have installed on the minimotherboard Alix.

the main disavantage of Compact Flash media, is that they are not writable every times you need, They have a nunmber of times you can rewrite, this number is high, between 300 thousand to million, that is the reason taht all the system, the voyage Linux distribution, is mounted read-only. you have two scripts, “remountrw”, to mount the filesystem with write permissions, and “remountro” to remount read only.
Moreover we have to take this into account on all the applications that need to write on disk.

Due that a lot of apps need to write in order to run, Voyage Linux, have a memory mounted partition where you can write, that is space is small (memory space), and is not permanent, you lost it where the system is rebooted.
The trick is that exists a directory called /ro where is all the information that will be copied to teh volatile directory on boot-time, the script taht makes that copy is on /etc/init.d/mountall the last line makes the copy using tar , tar -C /ro -cf - . | tar -C /rw -xf - > /dev/null 2>&1

And then when you need a writable directory yo make a link to the /rw directory, we can see an example with the var directory.

One interesting function our embedded is file sharing, we can share flash contents and contects mounted on usb ports.

This are the way to have it working:

since this point, It would be a normal samba installation on Debian, but if you try to boot samba it complans about file write permissions on the files located on /var/lib/samba, however samba works perfectly with remountrw, moreover we have to “convert” that files in writable ones.

INSTRUCCTIONS to make a writeble directory and make Samba works.

We can check, It should work!! 🙂 The user could imagine with that example how to make work other apps like emule. 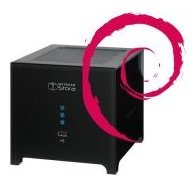 As I explain on previous posts, I adquired a cheap two SATA bays home NAS, called Netgear Stora. After the disappointing privacy a features unfunctionalities the manufacturer give to us, the community again have achieved to develop an alternative way to open and use the software for this device, It is now achieved!! you can run an standard ARM Linux distribution on it!!

On my case, I have installed a flavor of Debian called emdebian.

It is a fantastic hardware to have a home Debian server.

If you are interested on this machine there is an active community on: http://hardwarehackersunite.com/.

The how to instruction are here: Howo to install Debian on Netgear Stora